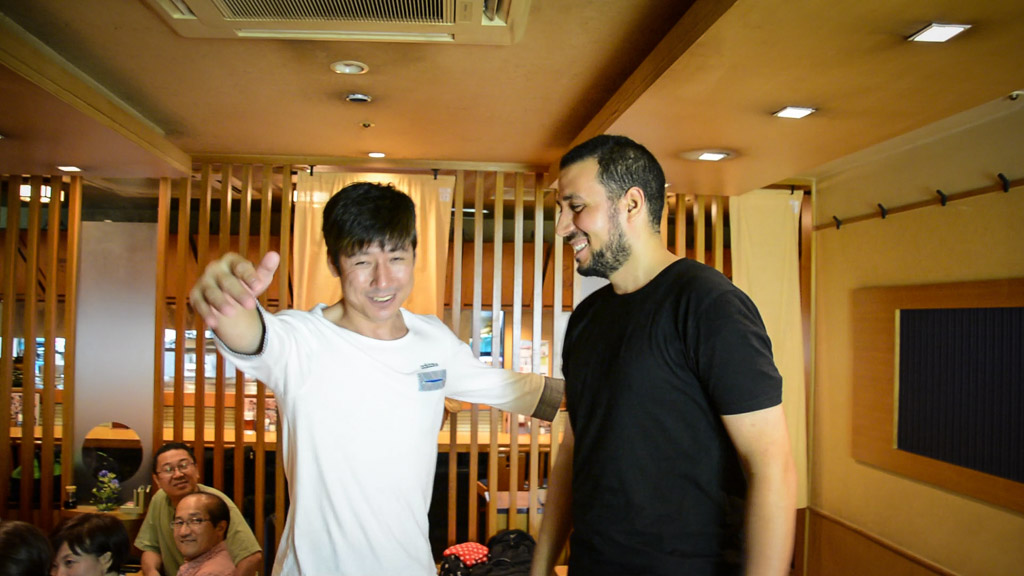 Yep, you read it right. Naka Tatsuya sensei, 7th dan Shotokan and JKA instructor, has provided me with valuable advices on a Saturday night at a restaurant in the north west of Tokyo. But before tackling those tips, let me explain you the events that led us to stand up inside this restaurant and execute some vigorous tsuki!

For my first visit to Japan in August 2014, I wanted to meet with some karate masters from different styles, train with them, and make interviews with them where I ask about their opinion in many aspect and subjects in the world of Karate. Tatsuya Naka sensei was on of these masters in my list that I wanted to meet because of the quality of his technics and the quality of his teaching in the many seminars that he did and that I’ve watched on the internet.

But in Japan, if you don’t have someone to introduce you, it can be hard to reach directly to a sensei and interview him. That’s why I had to be prepared several weeks before my arrival in Tokyo. I made a list of all the questions I wanted to ask the karate masters, including Naka sensei, and I started to search ways to contact these teachers.

About Naka sensei, I have not been able to find his personal email or a direct phone number. But after half a dozen of mails and phone calls to the JKA honbu dojo spread over several months, I was finally able to speak with Naka sensei in mid-August when I was in Okinawa two days before my flight to Tokyo.

Over the phone I explain that I am Tunisian, that I would like to train with him and that I would like to make an interview. To which he replied “training ok, but interview it’s difficult.” After my insistence he asked me to send him the questions by email and he gave me his personal email address. A few days later, while I was in Tokyo, he replied by email and accept that I can come to his dojo at Myogadani a Saturday night!

The meeting and training at the dojo

So here I am in Tokyo, my karate-gi on my shoulders and my camera and my tripod in my bag, heading to Daiichi Junior High School where he teaches at 07pm with his wife, his brother and two of his friends.

In the dojo I also found Jean Pierre Fischer sensei with some of his students who also came to train with Naka sensei, a very friendly group. So I get into the dojo (which is located on the first floor of the high school) and I discovered a myriad of childrens between 7 and 15 years old from the white belt to brown and black belts, performing tsuki while shouting their kiai with every movement. Maybe 40 or 50 kids or maybe more! A real army in action

Naka sensei was on the other side of the dojo, when he saw me standing near the door he ran over to me with a big smile on his face. He asked me which country I am from, when I said I am Tunisian he recognizes me and shouts “WELCOME WELCOME!” Squeezing my hand very hard, then he asked me to go to change because the class will start very soon.

I said to myself “well, sounds like a good start”

The class begins and we start with basic movements: tsuki, uraken and blocks, with an emphasis on hip movements. Then comes kihon which is repeated several times before putting them into practice with a partner during an jiyu ippon kumite (semi-free sparring). We finish the course with kata: Bassai-dai, Jion and Chinte.

The training (2 hours) finished, I open the pictures ritual with the master. After me came the four French guys and then two Spanish. After the photos, Naka sensei told me to change and to meet him downstairs because we where going to a restaurant with many of the students that attended the class tonight.

Relaxation and the beginning of the interview

The restaurant, close to the dojo, offers a very friendly atmosphere, you sit on the floor, dinner is delicious and filling at once, the orange juice is at will, which is a good thing for me since I must have lost 10 litres of sweat during the training

Naka sensei sits in the middle of the table and shows me the chair in front of him, then he placed the other students organizing them by the languages that each one of them speaks so no one is left alone. The orange juice came, we devoured the first Futomaki, then I opened my tripod and set up my camera, the interview can begin!

I first asked some questions to which Naka sensei responds with pedagogy, then two questions came one after another:

– Why do martial art masters insist so much on breathing?

He thought for two seconds and then turns back to me and said with amusement, “Do you want a demonstration?”. A demonstration on a Saturday night, in an full restaurant, from Naka sensei, Of course!!

So, here we are, standing in the middle of the restaurant, throwing vigorous tsuki, while 3 or 4 people sitting have unsheathed their cameras and smartphones to take pictures!

For the first exercise, he asked me to throw a tsuki and to block my breathing at the moment of impact, in the same way as we do when we try to simulate a kime and give the impression that our movements are sharp and decisive. I did it then he gave a slap on the front of my hand, I found myself pushed backwards, I lose balance. He told me “It’s weak”.

Then he told me to bow the same way we do when we salute while inspiring during the descent, then when we are inclined, he asked me to expire. Same thing, getting up: inspiration during the ascent, then expiration at the end of the movement.

The difference between an amateur and expert, is the mastery of the details.

He asked me to throw a second tsuki, then he hit my hand harder than the first time. Surprise! I did not moved an inch! Instead, I felt my whole body, feet, legs, back, shoulders, all together pushing back his shot. In a split second. As if it were an innate reflex, I did not have to think about it, I just did it. Unconsciously.

I was so surprised that I laughed. He told me “This is Karate. Budo Karate”.

Then come the turn of the second experiment, the heels. He asked me first to jump the same way we do in the kumite (sparring). Then he asked me to get back to straight position and to throw a tsuki. He then hit again on my fist and I found myself pushed back as in the first experiment.

Then he tells me to stand up on my tiptoes and to fall on my heels. And then, a miracle happen 🙂 I threw a second tsuki, he hits harder, and as before, I did not move an inch!

He explained, to me later this night, that the sport Karate, although important, is more or less becoming a kind of cultural folklore to entertain the gallery. Unlike the traditional Karate, it is not based on self-defense, the very spirit of Budo (martial art). This is why Karate, in its sport version, tend to forget this kind of extremely important little details.

I then recalled the words of my karate teacher in my home town Gabes, Brahim Zarati sensei: “The difference between an amateur and expert, is the mastery of the details”.

Here’s the video, feel free to share it as well as this article. Because, as a certain Dalai Lama said: Share your knowledge. It is a way to achieve immortality

So, here ya go, that’s the story of my saturday night during which Naka Tatsuya sensei taught me these two tips that find their origin in the roots of traditional Karate. Try them, put them into action, and in all cases, tell me what you think in the comments below. If you have any tips or similar stories do not hesitate to share them as well in the comment section, I would love to hear about them

8 thoughts on “That night when Naka Tatsuya sensei taught me two mysterious tips in a restaurant!”